Archetypical opinions about professions are as old as humankind, for certain professions more so than for others. I was fascinated by why this happens, the labels and the clichés. This led me to create of a series of portraits in (periode).

De Zangeres (The Singer)
Around 1976, me and my friends met the lady who owned the local shop in a tiny village near Viens. A typical shop that sells everything from stock cubes to stamps and medication to gas bottles. The lady turned out to be a former singer and prostitute from Paris. Her face was powdered chalky white and she had black, drawn on eyebrows. We were young, tight and tanned; she was the complete opposite. Her excitement about this abundance of young, male beauty is still a fantastic memory.

De Directeur (The Director)
Until recently a director was pictured as a man in a three-piece suit, cigar in one hand. A man whose office lies behind double doors, ‘guarded’ by a secretary seated just outside. Since I became director of an arts centre in 1997 I know better. This painting symbolises the iconic director from days gone by.

De Notaris (The Notary)
The owner of this work later became my notary. This man is nothing like the archetype of a notary in the eyes of the average person. He is empathic, warm and supportive. In short, someone who has your back.

Matador
Long before soccer players became audiences’ favourites, matadors were playing with their lives. They performed a dance in the arena, just them and the bull, with an uncertain ending – wearing an elegant, golden suit and with death palpably close, playing with the opponent’s rage and blood. 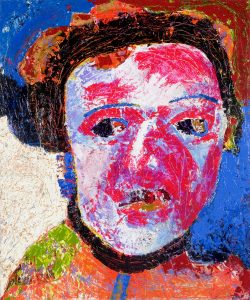 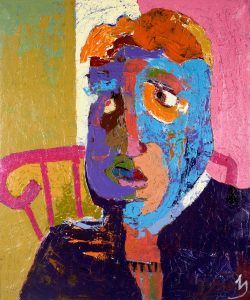